That’s it! Enough with this crazy place, and crazier young lady. I stomp out of the so-called “Interactive Visitors Center" as quick as my legs will take me. When I calm down a little, I notice I’ve still got the worthless “guide” in my hand. And, of course, it’s still blank. It wouldn’t be so bad, if they didn’t pretend to be giving out useful information only to slap you in the face with that blank page. Ugh!

I don’t know where I am, and I’m not even in the Canyon yet. [At least I don’t think I am.] Wait, What? There’s a restaurant, or a snack bar, or something. I’ve used up all my road food on this insane detour, and I’m hungry.

The restaurant looks a little more organized than that Visitor Center. They have a Menu posted outside and the menu even has writing on it. Hah, hah!! Wonder if it’s gonna be pricey…

Let’s see…Oooh, Prix Fixe. It is going to be fancy, but what the hell… I have a feeling that some comfort food will go down real good about now… 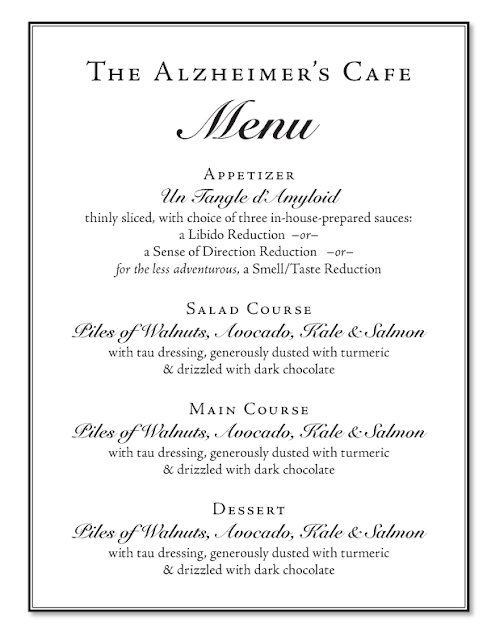 Kinda different. But then again, what isn’t around this place? Plus, I’m not getting any less hungry. Time to eat.

The maitre d’ meets me at the door. He’s all in white, head to toe, very classy.

“Welcome to The Alzheimer’s Cafe, sir. Do you have a reservation?”

“Well, no, this was an unplanned trip.” Looking around and seeing no one, I ask, “Are you really open?”

“Yes, yes, quite a few went down today,” he lets me know with a wink and a grin. Kind of an oily grin. The kind of oily grin that doesn’t inspire a “Wait, What?”

“Will you be dining with us this evening, sir?”

I must look like an idiot, travel-worn and rumpled, standing in this fancy starched-white palace. Does the maitre d’ sense my discomfort?

“Sir, if you are concerned about a dress code, do not trouble yourself. We serve everyone here. We will meet you where you are. Please, have a seat. We’ll take it from here…. sir.”

As you might imagine, the food is as strange as everything else in this special place, but I’m a good boy and eat what I am given. Soon, a group of three joggers show up. With nothing else to do, I stare at them, and try to discern. Something is off about them, but it takes me a while to figure it out. The men are just in from a run. I hear something in their talk about the 10 mile mark. Another mentioned the upcoming ACM, Alzheimer’s Canyon Marathon.

That’s it! These guys are marathoners, at least in their spare time. And they are OLD. But, their BODIES…. Totally Ripped!! All three have the lanky, sinuous build of the serious long-distance runner. On top of that they sport sharply defined muscles….everywhere. 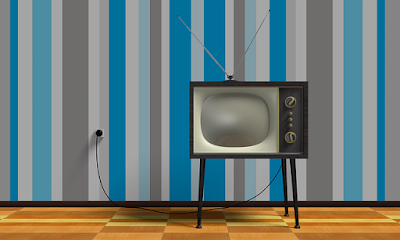 Ever since I watched Jack LaLanne on TV as a kid I’ve been amazed about old people with real physical skills. As an elementary-aged nerd, it was hard to ignore the images of SuperMen everywhere.

Just two highlights of Jack’s accomplishments (check him on Wikipedia for a more complete list):

in 1974
Jack’s age 60
Sky’s age 24
Jack swims from Alcatraz Island to Fisherman’s Wharf with his hands tied together, towing a 1,000 pound boat.

Jack LaLanne was a showman and businessman. He sold elixirs to counteract the “pollution” in the Western diet. Most memorable for me was the way that he came into my life through the television, demonstrating and sharing his exercise program with the world, one TV at a time. Handsome, healthy and friendly, he was a “regular guy” who happened to be bulging with muscles and was prepared to tow heavy boats while swimming in the ocean handcuffed.

He was convinced that good diet and exercise (LOTS of exercise) were the key to a long, healthy and happy life:

He also subscribed to the unfortunate concept of blaming people living with Alzheimer’s for bringing on their conditions:

I know so many people in their 80s who have Alzheimer's or are in a wheelchair or whatever. And I say to myself, "I don't want to live like that. I don't want to be a burden on my family. I need to live life. And I'd hate dying; it would ruin my image.”

Sadly for Jack, his “kingdom” proved mortal after all. He died in January 2011 of pneumonia, aged 96. But his legacy lives on in his "acolytes" everywhere who plan on outwitting death and "disease" with supplements and sit-ups. Good luck with that.

--
Click here for the beginning of the story: Alzheimer's Canyon, Part 1.