If you want to rent a sailboat at the Community Sailing Center in Burlington you have to pass a test.  A couple of days ago I visited this place just to look around, and I wound up sitting on a box, pencil in hand, about to face down a written Test. Now, for someone on the Dementia Continuum, the idea of a cognitive test of any kind is likely to be anxiety-producing. And, of course, experiencing anxiety, no matter what the source, is virtually guaranteed to lead to more anxiety, which then leads to more of the same with a resulting weakened cognitive function. Somehow, the conversation had got a little ahead of me, and that must have been when I agreed to give the Test a shot. Luckily, I didn’t yet know the protocol where you are only allowed to take the test once, and if you fail, you have to take some kind of a remedial course.

Countering my stress was a certain confidence in my sailing experience. I had just calculated that I had first “sailed,” i.e. ridden in a small sailboat, exactly 60 years ago, and learned to sail on my own a year or two later. Since then I think I have sailed more summers than I haven’t. Mostly, I was going by the theory that, like riding a bike, once you know to do it, you just don’t forget. 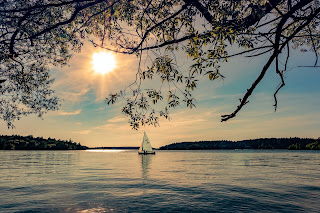 Countering my confidence has been the stress of the past few years of unpredictably forgetting all kinds of things. The concept of “Things You Just Don’t Forget,” now seems more quaint than unassailable.

So, would this written Test be smart enough to tap into my nautical reserves that I was counting on “just not forgetting?”

Would I be smart enough to pull up words and concepts across decades of time?

Multiple Choice would have been easier, but I was able to write down names of various parts of the boat… Sheet, not rope, that goes to the boom. I guessed (correctly) which was the starboard tack, and I knew that the boat on this tack has the right-of-way.

I pulled up three reasonable ways to tell which way the wind was blowing.

On a roll, I identified: reach, beating, halyard, beam reach, and more.

The staff person graded the test with me - a prospect I found mildly terrifying since I thought I had relied on a fair amount of guesswork.  But my “guesses” turned out to be mostly right on.

I passed, and It was a good day!

And now, a final question from the test:

True or False: A sailboat has the right-of-way over the ferry.