Sky: Lost on the Train

STEP ONE: GET TIRED.
Jane and I board the Vermonter, AMTRAK’s direct train from Northern Vermont to New York City, at 9:45 AM. Our final destination, Edison, somewhere in central New Jersey, 11 hours later.

It turns into a LONG, LONG day. Nothing wrong with the train. The train is almost always a good time. [Note: this all happened before the deadly train derailment in Washington State!]

STEP TWO:  GO UNDERGROUND.
Our itinerary requires us to change trains at Penn Station in New York City, and ride on a New Jersey Transit train for a final hour to get to our destination. This is where things start to get weird. We get off the train along with the other passengers and step off onto the station platform. It turns out that those platforms have not been renovated since they were built in 1904. It is dim and dark down there. We follow the crowd up a set of escalators that bring us up a few floors, but still underground, to a waiting area I don’t remember from other trips. No natural light. No air. I have to squint to read the signs.

Jane shifts into high gear and goes on a quest for tickets and info about the next train. Tickets are available by shoving money into a slot in the wall, and Jane quickly takes care of business, no other humans involved. The next train leaves in just a few minutes. We tumble down more narrow walkways and stairs, heading for who knows what. Once again, Jane has everything right, and there is a LONG train waiting to leave at yet another grimy platform. A conductor is blowing her whistle and shouting for us to get onboard. I stop and admire the setting, imagining how perfect it would be for a European WW II movie. Just add some steam, cigarette smoke and fedoras… Jane gives me a glare and a shove, and we are on the train as it begins to move. Perfect!

STEP THREE: STAY IN THE DARK.
The slick, electric commuter train we are now on is as different from the long-distance AMTRAK as a Smartphone is to a clunky “modern” phone of the 1950s. It whips out of the station, getting up to speed in a flash. Pre-recorded announcements give occasional muddy info about the next stop. There is no map of the train’s route. I guess you’re just supposed to know. The windows are huge, but the lights flashing chaotically by just emphasize how ungrounded we all are zooming along through the dark. 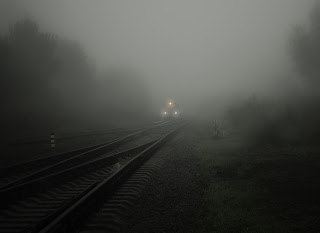 STEP FOUR : READ AN EXCITING BOOK
Jane goes for a walk. When she returns, she notes that it’s a “long” train. I nod and get back to my book.

STEP FIVE: LOSE TRACK OF TIME AND SPACE
After a (long, medium, or short) while, a walk begins to sound like a good idea, and besides I have to pee, so after a quick consult with Jane, I head out the way she has returned. Luckily, just as I leave our car, I pick up a pen from the floor, and I find the presence of mind to write our car number on my hand. Soon, I quickly discover another bewildering feature of this train…every car is a clean, shiny plastic car that looks identical to every other clean, shiny plastic car!!  And every clean, shiny plastic car is a double decker, with stairways at each end. This means that each car has double the seating and a whole different set of passengers depending on if I’m walking on the upper or lower level. Uh oh…

I walk, and walk some more. Very quickly, I’m disoriented. Soon after, I’m completely at a loss. Even though the cars are identical, if I turn around and walk the other way, the passengers may or may not be the same depending which level I’m on. After traversing some more cars, and going up (or maybe down) a level or two, I finally see something different: two conductors…. actual humans…! NJ Transit must be saving labor costs because these two appear to be the only conductors on the whole train. No dining car, no cafe car, no lounge car, no baggage car. Just clean, shiny plastic, identical cars.

I ask the conductors if they could please direct me to the nearest rest room, and they just look at each other…. which I take to be not a good sign. After a few more silent looks, one points in the direction I just came from and directs a silent look my way, ending the one-way conversation. Given the condition of my bladder, I’m sure I would have noticed a bathroom if I’d passed one.

This leaves me with some unattractive options:

* The conductors are messing with me.

* They don’t know where the bathroom is.
* There is no bathroom.

I square up my shoulders, thank the conductors, and head out in the opposite direction of their advice. As I leave them, I pick up my pace. Soon I’m moving sturdily down (or up) the train. It is impossible to know which way is forward or back, and besides after standing a while trying to figure out (unsuccessfully) which way is which, I don’t remember which way I was going when I stopped or when I started, so by now I am totally turned around. Since I can’t rally any brain cells to help me with my decision, I just pick a direction and a level and go.

After a (small, medium or large) number of cars, I stumble upon…… my conductor pals again. I’m pretty sure I entered their car from the opposite direction than I left it, but my memory is on break. Then I remember the scribbles on my hand. With as much confidence as I can muster, I ask him if he could direct me to car # 105783. Watch out! Here comes the look again!!! He goes to another car, with me in close pursuit, pushes a button, and unfolds a giant door. The compartment behind the door looks to be the brains of the train. Fortunately, It’s working a lot better than mine this evening. The silent conductor plugs a laptop computer into something in there, nods, and with a final silent look my way heads down (or up) the train. With my remaining senses on full alert, I stick close to the conductor.

Like a small child, I am terrified of the consequences of losing the adult-in-charge. I’m smart enough to realize how easily I could pass Jane’s position on the train by taking the wrong level. And dumb enough to lose my sense of direction alone in a strange place.

I follow my hero silently, looking at each passenger as we pass by. Soon, we come across the loveliest sight in the world: Jane, steadily knitting along like nothing bad could happen…. home at last!!