It is almost February 2nd, halfway between the Winter Solstice and the Spring Equinox. It was five below zero (F) this morning when I got up, and now it has warmed to a balmy six above. The sun is out, not a cloud in the sky, and no wind. I spent a little time outside, and with enough clothes on, it was actually pleasant. I watch the people out ice fishing on the lake -- some have been out since dawn -- and know that they are more rugged than I am. I like winter, but I am thrilled that the days are getting longer. The sun warms my house, and my spirit.

Sky (and most of the staff and residents of his facility) has received both doses of the vaccine. No side effects have been reported to me. That's good. But the "side effect" that I wait for is a change in the visiting policy. No word on that yet.

I continue with Zoom "visits" with Sky, and the occasional phone call when he wants to talk with me. At the scheduled Zooms, I never know what will happen. One day he was "hiking" and had to get going, and the staff member graciously held the tablet next to Sky while he walked up and down the halls. Sky and I didn't speak much, but the staff member and I did, and I told him tales about Sky and his long distance hiking experiences. Although I wasn't able to interact directly with Sky, I was pleased that the staff member knew a little more about him, and who he had been, and that perhaps that would help in their day-to-day interactions.

Sky continues to fall periodically, and hurt himself in other ways. When he does that, the nurse is required to call and tell me. One time he hurt himself because he was on his hands and knees "fixing" the toilet. Another time he was on his hands and knees escaping a war. But whenever the nurse calls (with the calls aways beginning, "It's not an emergency!"), she then goes on to tell me something Sky did or said recently that they found endearing.

But we all agree that we can still see Sky there -- a tip of the head, a shrug of the shoulder, a chuckle, a song, a smile, a brief flitter of recognition when he can look at the screen. When he was first diagnosed, he was so worried about losing himself, but that hasn't happened. Sky is still there -- it's just that sometimes he can't communicate that in words.

My garden seeds arrived a few days ago, and I've got a big bag of potting soil ready to go. It's too soon to plant the seeds, and I must be patient. But with the growing light, and the passage of time, I know the day will come when I can nestle those seeds in the soil. Then I will, once again, have to be patient as I wait for the plants to emerge. Those of you who know me well, know that patience is not one of my virtues, so this is good practice for me.

Maybe with spring, and sprouting seeds, I will finally be able to visit Sky? In the meantime, I stay snug at home, grateful for the growing light. 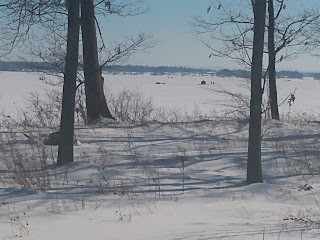 Email ThisBlogThis!Share to TwitterShare to FacebookShare to Pinterest
Labels: patience