Sky: The Elephant in the Room

I want to introduce you to my new friend. 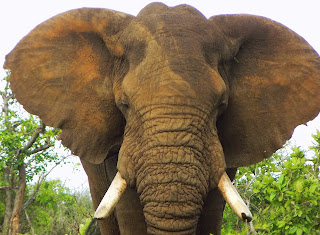 Her name is Mnemo, [ NEE- mo ] and she has a memory you wouldn’t believe! Her brain has three times the neurons of mere humans. A lot of that “extra” brainpower goes to making her huge body so graceful and athletic, leaving her kajillion of billions to power her phenomenal memory. In many areas, her short-term and long term memory each outshine humans', demented or not.  Mnemo doesn’t waste her neurons memorizing numbers or lists or appointments, but she will NEVER forget a face. Cool…huh?

Mnemo and I go a lot of places together. We are allies. She especially likes social situations, more than I do. And she can keep me on track. Kind of like playing with dolls, maybe…. Mnemo lets me dress her up. Well, we call it dress up. It didn’t take us long to realize that if you want to do anything at all in life besides dressing up an elephant, don’t dress up that elephant.

We settled on me outfitting Mnemo with attractive and interesting signs, one on each massive side. Currently, her signs read: NO CURE and ONWARD.

Here’s a fun thing we did last month…

A friend of a friend approaches me and lets me know that he’s heard about my Alzheimer's. He tells me about his friend with dementia, how everybody rallied around him, and created a Program for him that was to cure his disease. Mnemo was biding her time, listening, eyes and ears wide open.

Glancing at Mnemo, I remind the stranger, “Alzheimer's is a terminal illness. No one recovers.”

I can’t tell if the stranger can see Mnemo, but I can. Did she just wink one of her dinner plate eyes at me? Turning back to the stranger I say,”You know, I’ve come this far, and I’ve got an idea of how far I’ve still got to go. I need to put my energy into making my time left just as meaningful as it can be. I’ve got to stay grounded and not get diverted by pie-in-the-sky, delicious as it may seem, ideas. But, thanks, man, really, I do appreciate your concern. So many people just shut down and run away when they glimpse this beautiful elephant in the room. Have a good evening.”

Email ThisBlogThis!Share to TwitterShare to FacebookShare to Pinterest
Labels: memory, the elephant in the room