Sky: A Bit of Personal Neuroscience

It turns out that a new and highly important part of the brain has only been discovered in the last ten years. It’s not even it’s own separate part…it is several structures working together as a hub to help make sense out of the tsunami of information and data. Its name is the Default Mode Network, DMN. Interestingly, this network wakes up and gets to work only when the rest of the body shuts down. So, when the rest of our brains and bodies and minds and consciousness enter downtime, the DMN literally switches on.

The job of the DMN is to keep the lid on, wax the floors when the office is closed, and generally re-establish order. So-called “lower” animals and young children have only undeveloped DMN, if any at all, instead creating a rich world of “magical thinking” to live in, with layers of wonder. Of course, many adults overshoot, as they put together their networks, building DMNs that are over-developed, leading to patterns of self-absorption and rigid thinking.

Michael Pollan, in his hugely popular book, How to Change Your Mind, invites us along with him as he tours various labs where, for years, scientists have been conducting detailed research into a number of psychedelic drugs. Although the concept of the DMN was unknown for most of these years, the concept quickly came to make a lot of sense to many in the field. Two British scientists posited the idea that one of the effects of the psychedelic drug was to temporarily disconnect the subjects’ DMN, opening wide the “Doors of Perception” [Aldous Huxley] allowing us to experience a reality that is vastly different from our everyday lives, yet at the same time is our reality.

So, once again, what’s the point of this brief ramble into and out of neuroscience and psychedelics?

1. Coincidence or not, the DMN is one of the first brain structures to be affected in a “typical” run of Alzheimer's. The other is the hippocampus, involved in laying down, or not laying down, memory. The changes in the brain are apparently not that difficult to find, especially if you have a PET scanner. And a brain at rest.

This scan was the basis of my diagnosis in 2016. At the time, the test was not yet accepted by the insurance industry, but now I see that the PET scan is in contention to be a possibly reliable BioMarker, with the potential to identify Alzheimer's Disease pre-symptomatically.

2. The other link is more speculative. I know for sure. ……I can feel it…. My hippocampus and other memory-related structures are working overtime just to keep my head above water. Ask anyone who has seen me lately, my short-term memory is the pits.

A Canadian group has recently confirmed that the DMN is one of the very first brain structures “suppressed” by Alzheimer's. I have to wonder, if my own DMN is in fact, going downhill at the same time.

What brain structures and functions are going along for the ride?

What will it feel like to be on the receiving end of this “suppression”?

Am I there yet? 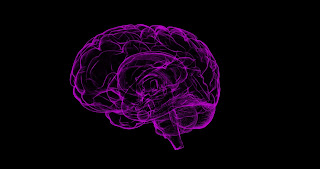