I know they’re hallucinations. I really do. How else could you explain the Stairway to Heaven? You could describe what it looks like….

…….. an elegant sparkling walkway curving graciously up and out of sight into the quiet of the Vermont twilight.

Would it help to describe the people there?

Probably not, since any description would soon veer into the “unreal” with the number of people alone. In the meantime, the Stairway keeps steadily disgorging more people, just like the sidewalks of New York.

I want to tell you about these creatures.

First of all, what are they? They’re not human, and they’re not not-human.
They all look different from each other and from humans, but somehow they’re enough human-like that they’re endearing. They’re small, they’re cute, they’re watchful and quiet.

They’re very solid, I don’t have to worry about them, they take care of themselves. One of them, Mr Green, he brings along his own fun (sort of like cats, they spend time doing stuff we don’t know about). He tends to be on the edge of the yard, he’s lush and leafy, and sometimes he gets rough and rowdy, and he shakes all over. That’s half of him — the other half will back up and run at the other one like they’re playing football. They both fall down, then jump up and do it again. It’s really funny.

There are a few familiar spots under it, but the Stairway curves up out of sight into the clouds. That was one of the only places I was scared at first because there were so many creatures, and they were dressed alike. It was getting to be dark, and I hadn’t seen them before, talked with them before. Later I got up the nerve to do that, and I was surprised when I spoke with one, I welcomed her, said I’d like to be friends. My guess is that she was already living there, and I hoped we could all get along now that I had moved in. I think she accepted me.

Now here’s a thing that’s a little more subtle. The other day, I said to Emma, “Look at that” — it was the echinacea flowers — “I’ve been seeing creatures today, and I want you to see them.” I pointed to the plants, she looked carefully, she shook her head and said, "I just see the flowers.” “OK, watch this,” I said, and we both backed up. (I had learned that the creatures seem to stress out if you get too close, they don’t talk, but look at you, and that’s a little bit unnerving.) Then the flowers did something that made me know that they understood me on some level. Normally, they’re just flowers growing in the flower bed, but I started to see that they were vibrating and excited. So I took a small step closer, and I could see that one of them, she had a head about the size of coconut and I could see one eye, but she was there just like all the other ones, quiet, not pushy, and I knew that she would out-wait me in any kind of contest.

Then she directed me to the roof, and there were these large creatures on the roof at the peak, there were these dudes just showing off, dancing, that sort of thing. I felt like I was safe because there was a lower roof between them and me and the coconut-lady, but they were so graceful to watch. They were strong. They were in green.

I wanted to tell y’all about this because it’s so amazing, it’s part of my new world, and it all makes sense to me. 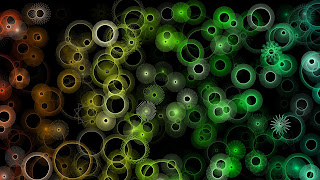 Email ThisBlogThis!Share to TwitterShare to FacebookShare to Pinterest
Labels: hallucinations